Scott and Tracey have a history in marine conservation and animal welfare. Prior to starting Oxford Bird Rescue back in 2012 they were heavily involved in the running of Pete Bethune’s Earthrace Conservation Organisation and when they brought their rural property in Oxford they saw an opportunity to continue their passion for wildlife at the grassroots level. 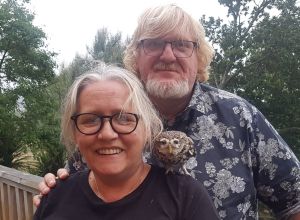 Since starting the bird rescue they have being developing the property to suit their bird rescue work, it is an ongoing process with clear vision on what they want to achieve. They run the shelter around their jobs, Tracey at the Oxford Workingmens Club and Scott as territory manager for a national produce company.

Being a small, self funded operation there is not the resources to collect birds in most instances so they do rely on people to bring birds to the shelter. Over the years they have built up a good network of contacts in the wider bird rescue community and are happy to assist in finding the right person or organisation depending on the situation.